UNLUCKY rugby player Daniel White discovered ‘it could be you’… that gets dumped by a girlfriend who turns out to be a massive lottery winner.

The Welshman was one of many Brits to suffer double heartache when someone’s numbers come up.

Just like Kirk Stevens, who missed out on a share of a £3.6million jackpot after his relationship with Laura Hoyle turned sour, Dan failed to get his hands on any of his ex’s fortune in 2016.

To add insult to injury, at the time he was living next door to her sister and her boyfriend, who got a £12million slice of the prize.

Other lovers have fallen out after scooping big wins or getting into disputes with National Lottery organiser Camelot.

Here we look at the romantic gambles that did not pay off.

Daniel White had been dating childhood sweetheart Courtney Davies for two years when she split up with him after going off to university.

The couple had been together at Monmouth Comprehensive School in Wales but drifted apart and found new friends.

Daniel, 27, said: “It was a school and teenage romance which just tailed off.

But not holding on to Courtney proved to be costly, when months later her sister Stephanie bought a lucky dip ticket from her local garage worth £61million. 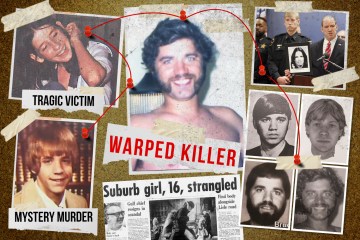 The close family agreed to share out the winnings, including giving a £12million sum to Stephanie’s boyfriend.

At the time Daniel was living next door to Courtney’s lucky sister.

He said at the time: “All my mates are savaging me – the first I knew of their win was my phone going nuts.

“The boys were all sending me links and jokey Snapchats asking if I was gutted. One said ‘how much have you cried since you found out mate?’

“I just put my head in my hands. I’m happy for them – but obviously I feel like it could have been me.”

Sarah Cockings was a penniless student when the Lotto turned her into a millionairess three times over in 2005.

The now 40-year-old from Whitley Bay, Tyne and Wear, got engaged to boyfriend Roy Kelley after her big win.

But a year later, with vows still unshared, the pair called it a day.

Sarah said: “I think we both got swept away with the fuss around the Lottery win and now things have settled down and life is back to normal we realise we’re just not in love with each other anymore.”

Fortunately for Roy, she had given him the deposit to buy his own home.

Glasgow hairdresser Barry Chuwen revealed in July that his 25-year relationship with partner Jenny had ended after he met another woman.

Since then he has set up a number of different businesses, some of which struggled.

Barry said: “I developed a relationship with someone who I met through work.

“I have apologised to Jenny and our children and hope to continue to be a loving father to them as they grow up.”

Jenny, 54, and Barry have three children and are selling their £1.75million five-bedroom detached home in Whitecraigs, East Renfrewshire.

If there really is a ‘Lotto curse’ then £161million winner Colin Weir was hit hard.

Before scooping that life changing sum on the EuroMillions in 2011, he was happily married to wife Christine.

But eight years later the generous pair, who set up a charitable trust, announced their 38-year union was over.

Three months after that, Colin sadly died aged 72 of kidney failure and sepsis.

Divorcing as win came in

Kim Cresswell was in the process of divorcing Hastings glazier Mark Gardiner when he won a half share of a £22million jackpot in 1995.

She told The Sun at the time “I’m after half his cash” and Mark later commented “whatever your problems, money magnifies them.”

Mark, 56, married his fourth wife Brenda shortly afterwards, but their union ended nine years later when he went back to his first wife Bridget in 2004.

Brenda said: “’She’s welcome to him. Mark throwing me out is the best thing to happen.”

Having a £3million fortune within their grasp and losing it led to Kay and Martyn Tott splitting up.

The couple from Watford, Herts, fought a failed legal battle with National Lottery organisers to get their hands on the money after misplacing the winning ticket in March 2001.

The strain broke them up just before Christmas that year, with Kay, 45, saying: “It drains the life from you and puts a terrible strain on your marriage. It was the cruellest torture imaginable.”

While Martyn, 54, who later joined a cult in the US and then became a writer, said: “It had become too much for Kay who just wanted to get on with her life.”