A lucky couple are celebrating scooping £1 million on the lottery after almost forgetting to buy a ticket and then believing their win was a scam.

Ruth Giblin, 44, and husband Rob, 48, of Telford, Shropshire, landed the huge windfall after matching one of the UK Millionaire Maker codes on the EuroMillions last month.

But Mrs Giblin almost forgot to buy the winning ticket on the day of the draw on July 22 and needed reminding by her husband, an engineer, while she went out to do karate.

And when she received a notification on the National Lottery app the following day, the sceptical pair thought they were being scammed. 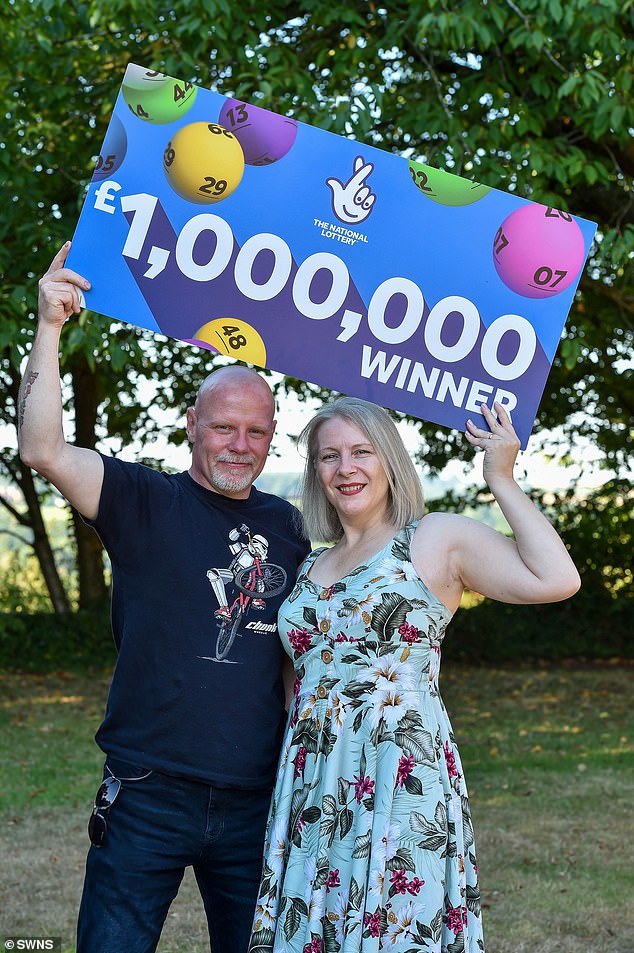 Ruth Giblin, 44, and husband Rob, 48, are celebrating scooping £1 million on the lottery after almost forgetting to buy a ticket and then believing their win was a scam

It was only when they called up Camelot to confirm their win that they realised they had become millionaires and immediately burst into tears.

Mrs Giblin said: ‘Rob reminded me to put the EuroMillions ticket on, as he has to every week, whilst I was out.

‘I bought it and promptly forgot all about the ticket and went straight to Karate that evening.

‘The next morning, we got up early for a swim and I saw I had an email telling me I had good news about my ticket.

‘When I logged into my National Lottery app, I could see I had only matched one number, but it was telling me I had won £1 million, I was very confused.’ 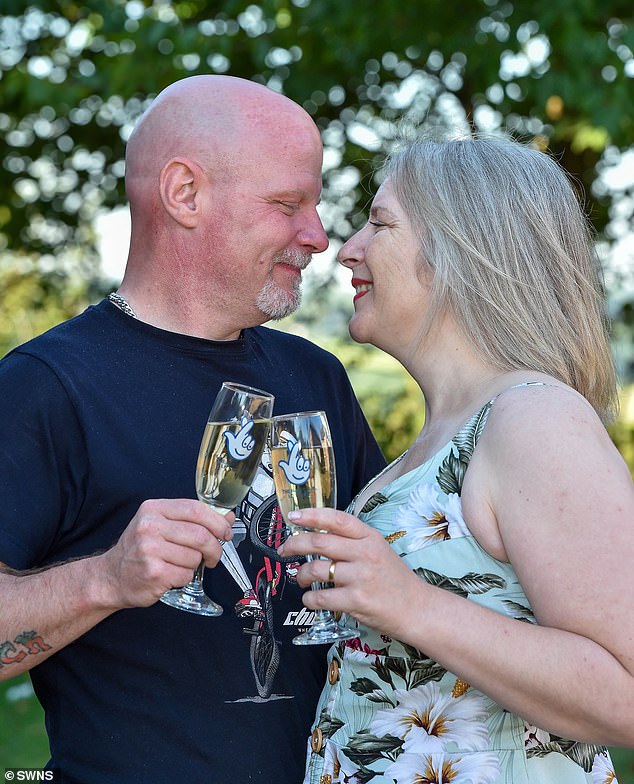 Mrs Giblin almost forgot to buy the winning ticket on the day of the draw on July 22 and needed reminding by her husband, an engineer, while she went out to do karate

Mrs Giblin, a leisure centre supervisor, was convinced it was a con so proceeded to search for the phone number she needed to ring to check the win was real.

She added: ‘I was sure it was a scam, but when I saw it was the correct number for Camelot, I tried to phone it, only to find they were not yet open.

‘Instead of waiting around, we decided to still go swimming. Although it was clearly all we could think about as every so often, Rob would stop and say, ‘what if it is real?!’.

‘We talked all the way home about what we would do if it was true but I was trying not to get my hopes up. 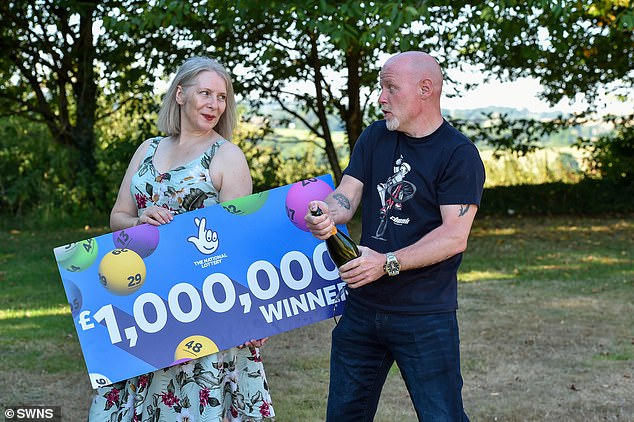 Mrs Giblin, a leisure centre supervisor, was convinced the alert on the app saying they had won was a con so proceeded to search for the phone number she needed to ring to check the win was real 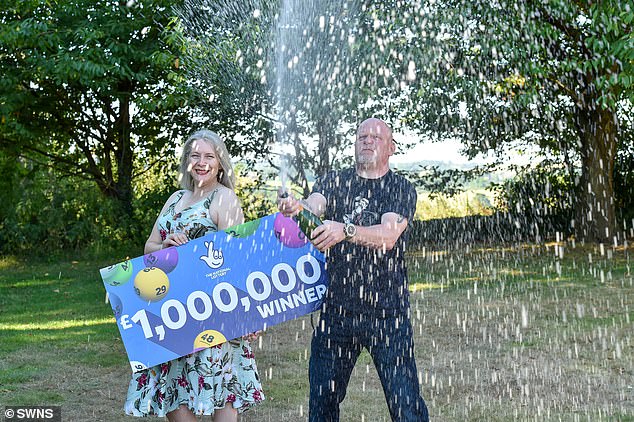 They tried to call Camelot to confirm the win but couldn’t get through so they just went swimming, even though it was all they could think about 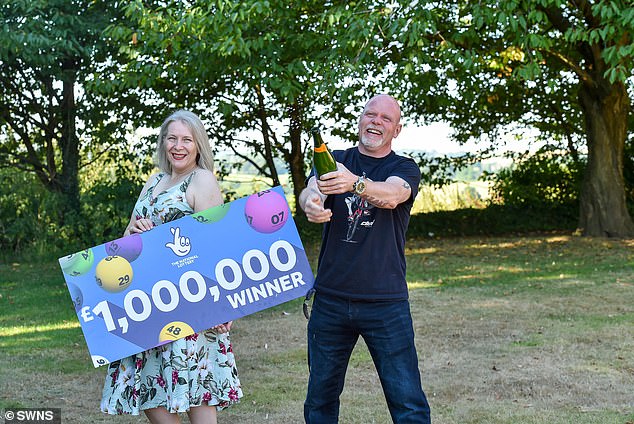 The Telford couple finally were told that the win was real and burst into tears, they then woke their two children to share the good news and went over to Mrs Giblin’s parents’ house to tell them

‘When we finally called Camelot, they asked me what I could see and then they confirmed we were millionaires.

‘We were just stunned and started crying.’

They then woke their two children up to share the good news and went across the road to Mrs Giblin’s parents’ house to tell them, on what was her dad’s birthday.

The pair, who have been married for 23 years, plan to keep their jobs but share their newfound wealth with the rest of their family including building an extension onto Mrs Giblin’s parents’ home.

They have also paid off their mortgage and will jet off on a luxury holiday together as well as buy themselves a new kitchen.

They are also planning to build a summerhouse for their 13-year-old daughter to use as an arts room and a gaming computer for their 16-year-old son. 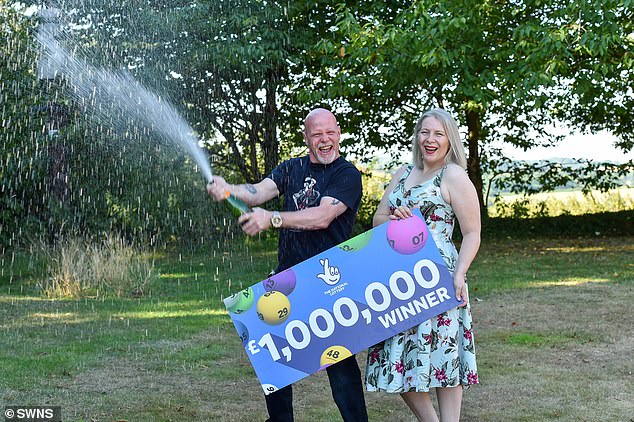 Mrs Giblin added: ‘This win means so much to us as a family.

‘It means I get to help my parents by building an extension onto their house so there’s enough bedrooms for everyone to sleep in.

‘My parents look after my sister who has additional needs so an extension will mean everyone can get a proper night’s sleep.’

Speaking at a press conference at The Telford Hotel, Spa and Golf Resort today Ruth added: ‘When we found out, I was absolutely sobbing and Rob was laughing hysterically.

‘We recorded the audio of the phone call and I was just going: “Oh my god, it’s not real”.

‘Rob’s bought a car. He loves car shopping. Car shopping and watch shopping, those are his two favourite things but I can’t stand either.

‘I’ve said to so many people that if we’d have bought a physical ticket, I would have never have checked it. We have the app so it tells you.

‘I just wouldn’t have thought to check the raffle. I don’t know why – tired, laziness, sometimes you just lose the ticket.’ 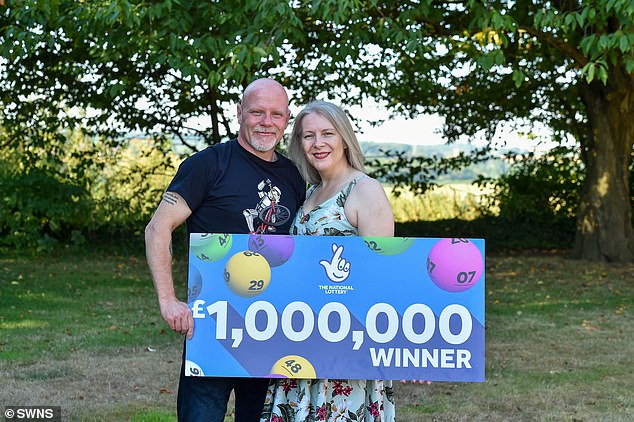 Mr Giblin added: ‘I’ve bought a newer car, a Ford Kuga. I needed a new iPad so I’ve got that. Nothing too out of the ordinary, nothing too extravagant.

‘We’re trying to stay very grounded but we were in utter disbelief.

‘Nothing has changed day-to-day wise, we do karate three to four times a week. I haven’t been doing it recently as I’ve been focusing on decorating.

‘If we’d have won the £195 million, I might have knocked work on the head.

‘But this is the amount that we’ve very fortunately won – it’s enough, it has secured us.’